Fun, challenging gig this week from Hot Docs Cinema in Toronto Canada. Make a poster for the animated Noam Chomsky documentary “Is the Man Who Is Tall Happy?”. Its a super stylized, psychedelic film directed and animated by Michel Gondry. It was a bit to wrap my head around at first but I found a way to make an original illustration that I feel pays tribute to the animation style and touches on some of the themes and conversation featured in the film. Thanks for looking 😉 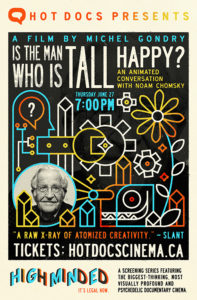