This Koyannisqatsi poster I did for @hotdocs popped on my memories today and I thought it would be a good opportunity to repost with some of my behind the scenes process and thinking – I’m going to try to do this more often (try).

Koyannisquatsi is a visually stunning documentary that cuts between shots of nature, cities, people, industry, consumerism, technology and then back to nature. Basically a moving collage showing out out of balance humans are and how we ruin everything. It’s incredible, but not exactly easy to make a poster for (especially in the minimalist style I prefer to work in). After thinking about some of the key scenes to focus on, I realized that’s not the point at all. This film is meant to be an abstract juxtaposition of everything at once – it’s chaos in its most organized form. That’s what the poster needed to be. Slide to the right to see some of the screen grabs and inspo images I worked from to create a sketch that felt like the both a tribute to the original promotional images as well as something totally new. Thanks for looking! 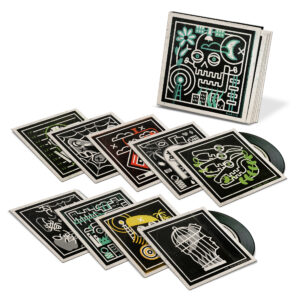 Rancid 2000 came out 20 years ago this month! Because it’s my favourite album of all time I made an illustration of each song to celebrate (and a bunch of fake merch, it’s not real don’t dm me bro). This project was my quarantine downtime activity and I’m so stoked to be finished and able to share it. Click the link to see the images and some sketches

What better way to pass the time than marathon Twin Peaks and curl up in this illustrated map of the town. Features all iconic locations like The Double R Diner, One Eyed Jacks, Timber Falls Motel, and of course The Great Norther Hotel. Up on Etsy now!

After spending a few months (years?) away – mostly travelling alone – coming home felt bitter/sweet. But my friends are so rad and I have been completely overwhelmed by their love and support. I made this illustration celebrating how far I have gone, and who was with me along the way. Available on Etsy now!

Most recent addition to Hot Doc’s High Minded series – Microcosmos! This month had the challenge of combining insects with a Valentines theme 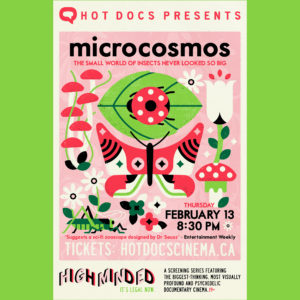 Been a minute but I’m back to uploading Animated movie reviews to youtube!

PRINCE OF DARKNESS is about Dr. Loomis (from HALLOWEEN) being a priest and inheriting a new church from some other guy that dies. In the church basement he finds a shrine and giant tub of green goo and realizes its and anti-god and its totally alive. So then he gets the grandpa from THREE NINJAS to bring a team of students and scientists to come study it and prove to the world its real… And real dangerous. While they are setting up shop and taking nerd readings and learning the goo starts to wake up and possess everyone and turn them into zombies and begin the process of taking over the world.

… And. As always here are some custom artworks I made to go along with it.

Havent done a time lapse in a bit, experimenting with surfer stuff and overlays for a new gig #illustration #design #timelapse

Fun, challenging gig this week from Hot Docs Cinema in Toronto Canada. Make a poster for the animated Noam Chomsky documentary “Is the Man Who Is Tall Happy?”. Its a super stylized, psychedelic film directed and animated by Michel Gondry. It was a bit to wrap my head around at first but I found a way to make an original illustration that I feel pays tribute to the animation style and touches on some of the themes and conversation featured in the film. Thanks for looking 😉

RJMay 1, 2019May 22, 2019
I first heard of Hot Docs around 2007 while going to college for Graphic Design, one of my favourite teachers was a documentary film maker and turned me on to the festival. I was blown away. Equal parts surprise, excitement, and dumb luck. Documentary had been a long time favourite genre of film of mine, and not only was there a festival that exclusively played docs in a cinema – but it was right here in the city I had just moved to. I think I had seen Fahrenheit 9/11 in a cinema, but otherwise I would get documentaries from the library or History Channel. I don’t remember Blockbusters having much of a documentary section and this was before Netflix took over (the dark ages).
Fastforward (movie pun intended) five-ish years and I joined a little documentary film club that met every month to see a film and then go out after for discussion. My ideal night out. I talk to the leader of the HS Doc Club about maybe perhaps I could do posters and illustrations each month to help promote the club. My long-con plan was to do posters for free for her (occasionally got some free passes) and establish my illustration and poster style as something that would be cool for documentaries. I love visual metaphors, simple colour, and not really giving away any of the story other than what it was basically about. Heavily inspired by Saul Bass and contemporary gig posters. I did one illustration a month for her club for about 3 years before getting my first paid gig from the festival, doing simple promotional stuff for one of their other year-round events. Hot Docs is the name of the festival that runs in the spring, as well as the name of the theatre that exclusively shows docs year round. So getting to do stuff for one of their many many events was a step closer. It wasn’t my white whale, but it was a foot in the door and some healthy reassurance my long-con plan was working. I was on their radar. Just had to keep on keep’n on and eventually I might be lucky enough to work for the main event, the annual festival.
The big email came in just before Christmas 2018. Not really a holiday guy but couldn’t have asked for a better present. 5 years of working for free paid off. In no way do I mean to sound like I was owed, its about time, or anything like that. I legitimately LOVE documentaries and doing posters each month and helping to promote events was in no way “work”. Thats what I want to do, and has been what I wanted to grow up and do for as far back as I can remember. I was asked to create artwork for the 2019 festival and I couldn’t be happier. I will get into some of the creative and behind the scenes process, but I really wanted to write this blog to get out how important this gig was for me. Maybe it will inspire others to have goals or whatever, but also for me to remember why I do what I do.
The concept for this years festival was “open your eyes”. I was brought in early of the development of the creative, and at the time it wasn’t decided if this was going to be a tagline printed along side anything, or would just be an underlining theme of stepping outside your comfort zone and looking more closely at things you either haven’t noticed or have never thought to look into. One of the early concepts we talked about was a kaleidoscope and maybe that could be a visual element we could work with.

Another obvious direction was focus on the word eye. Maybe we could do something that used eye graphics or insinuated watching. Obviously, this was too obvious and the direction was scrapped. Thats a good thing though. I always feel like exploring a bad idea and being sure is better than not touching it and second guessing later if there might have been something there.

I was making some pretty complicated collage type illustrations (like I love to do) but one of the simpler pieces of a bigger image caught the eye of the festival team. I raised fist holding a lantern. The lantern supports on each side had two faces looking at each other, to imply conversation taking place. It spoke to the open your eyes idea with a leading the way kind of feel, and the closed hand also worked as a representation of a revolution.

From there, we tried to think of different ways to handle the light rays coming off the lantern. Different patterns, hidden images, and even a few tries to bring back the kaleidoscope imagery.

We needed up dropping the taking faces aspect and making the first larger. We felt having too many pieces diluted the overall idea and the simpler, the better. Next was to start experimenting with colour and seeing where we could push thing while still staying on brand with the green and yellow.

The festival team was pretty into all the colour experiments I did and end up going with the wild card idea of using all of them. I love wild card ideas. I made up a bunch of different posters with different schemes at the festival would mix and match them for different uses. Thinking that instead of plastering the whole city with the same image, if it changed up a bit maybe it would stand out more and get extra attention.